Hello, my name is Moose.  I live with a family who cuddles me and takes me on adventures.
Adventures that are whammy and fun! Some things that I like to do is visiting new places and meeting new people.  Our trips are called Overlanding.
Read about some of my adventures, here on Overlanding With Moose!

Posted by Catholic Camper at 12:51 PM No comments:

A Day at Texas Memorial Museum

Hello, my name is Moose and I like adventures!
A proper-play-place that's close to where I live is the Texas Memorial Museum.  It is fun to visit because you can see animals from the past and some that roam around today!
My friend, Catholic Camper took me on a hot day.  The museum was cool inside and was so big that I had to open my eyes wide to see everything.  The entrance was on the 2nd floor.  When I looked up, I saw a giant Dinosaur hanging from the ceiling. Around the room there was a lot of diamonds and jewels! Some are small, others very big! They come in lots of different colors such as red, yellow, blue, green and so much more!
When we walked down stairs to the 1st floor I saw animal’s that didn't move.  Catholic Camper said they where models and not real.  Some were from the early years of the world.  Other animal’s, like the Cotton Tail Rabbit, you can still see today.  Still, other animals such as the Buettneria Perfecta you don’t see today because of a comet that hit in the earth long, long ago.

Catholic Camper and I went to the 3rd floor where we saw different kinds of snakes including the deadly coral snake! (Here's a tip if you don’t want to get confused about the coral snake: red next to yellow, kill a fellow. red next to black, venom lack.)
When I looked to my left I saw two exhibits:
1. Fish that live in the water
2. Animals that live better in the night

Finally, we got to the 4th floor.  I saw neeto things like a model of the DNA code. Other exhibits were ants in Central and South America, creepy things that walk on the ground, and other animals I have never seen before.
Go see new and old animals.  Go with friends like me and Catholic Camper, enjoy the day at the Texas Memorial Museum.

Their website:https://tmm.utexas.edu/
http://www.utexas.edu/tmm/visit-tmm/
Posted by John at 9:00 PM No comments:

Nestled in the piney woods of East Texas is a phat trail known for early 19th century logging and the Big Slough Wilderness Area. The 4C Hiking Trail stretches along a system of old abandoned tramways. It's a point-to-point 20 mile trail left by the Central Coal and Coke-a-Cola company which log there in 1920. Today it's barely noticeable as much of the forest has reclaimed its territory.
Hiking this trail after Christmas was a gift.  Spending time alone with my family while exploring new things is a sport I enjoy.  Although, we only finished15 miles, the excursion brought us closer and we visioned further than our last adventure.
For more insight, click here:
Want to know more? Contact Mr. T
Posted by Catholic Camper at 10:41 PM No comments:

I like books.  I like the way they smell and how the pages make funny noises when I turn them.  I like to read and to be read to.

Recently, my family read a new book to me and it made me sad, but then happy.  The title is “Everybody Belongs” and is a story about two friends named Sam and Ray. Sam and Ray are best friends. They hang out with each other, have sleepovers, and play on the same soccer team. Ray is new to the city and finds Sam as a new friend.

But, not everyone in town is fine with that. Later in the story, Ray and his family fall victim to hate speech and a vandalous crime. Sam is not ok with this. And with the help of his school friends and teacher, Sister Bridget, they help the Ikanga Family recover and amend this hateful crime.

"Everyone Belongs" is a good story for you to read or for someone special to read it to you. 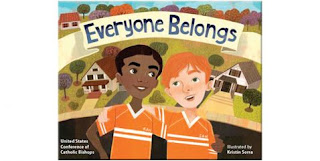 Posted by Catholic Camper at 5:34 PM No comments: 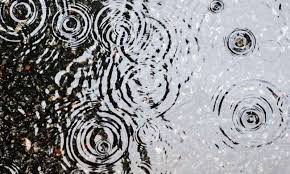 you fall YOU fall
you feel so nice,
so small
just like grains of rice.

raindrop fill up barrels
you fill up lakes,
you fill up rivers
now you are at your breaks.

I woke up early and the sun wasn’t even out yet! We are loading the truck and that means it’s time for another trip! This time, we are gonna go to New Mexico! I've never been to New Mexico. My family tells me that it's different from Texas and much cooler. It's midnight and the trip is long, so I'm going back to sleep!

"Wake up Moose!" Catholic Camper said, "we arrived in New Mexico!" I am so glad I got to sleep on this part of the trip! It was definitely long! Right now we stopped to get some gas for our truck. Already the outside world is much different! It's dustier and more like a desert! The towns are farther apart as well! The trees are brown and green, the sky looks different. So far, I like New Mexico!

After a couple more hours, we find our first camping spot! The campsite is just off of a mountain road. It is in a large meadow of tall green trees between mountains! It is so nice here and the temperature is cooler! I might have to ruffle my fur to stay warm. But for now, I am so hungry! I'm gonna eat lunch and watch my family set up the tent. Maybe we can go on a hike later? Hopefully!

After dinner Catholic Camper shared stories of the past and laughed loudly. Some stories were so funny that they made my smile hurt.

It is getting late now. The sun is getting closer and closer to the mountains. The sky is filling up with orange and red colors from the sun. It is so relaxing here that I might actually fall asleep early. I will probably go to bed before dessert.

Posted by Catholic Camper at 12:28 PM No comments:

Duke is an action packed story about a dog, a boy, and World War II. It has so much action it has to be set up on a timeline! The main character, Hobie Hanson has to make many sacrifices, even ones that will hurt him. Losing his best friend, giving Duke (the dog) to the army, and having to be the man of the house while his dad fights in war is a snip-it of sacrifices.
This story takes place from 1944-1945. War has fallen over the city of Seattle. Hobie has some struggles that he has to face with already! For example at the age of 10 he has to live without a dad. A mean bully named Mitch Mitchell who dose not have a clean record in school, smokes at the age of 11, teases everyone he sees, and shames Hobie. Furthermore, Hobie has to adjust to the fact that his old pal Scooter is gone, and he must think hard about if he wants to give Duke to the army or keep him. Will his dad AND America lose to the Nazis? Can He Do It? 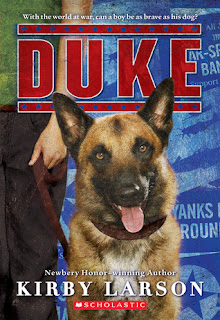 Posted by Catholic Camper at 4:06 PM No comments: